Widewater is always a favorite for the team, and it was fun to initiate several new runners (and a couple coaches) into the fan club.  As with last year, there was a “water hazard” right at the bottom of the hill preceding the final stretch to the finish. Fortunately, it was not waist-deep this year, making it more manageable (if anything, the hazard was the muddy spot on the other side at the base of the hill).

Our high school teams were still thin this week as we continue to try and get everyone healthy; we had three runners out with illness/injury and a few “walking wounded” who fought through the race at less than 100%.  Brendan was able to turn in a season best time despite a nagging hip problem, and John and Phoenix both set lifetime PR’s in the race.  Phoenix became our first sub-20 runner since Kurtis Pierce at the District Championship in 2011, and cut an amazing 2:39 off his time from last year’s Widewater meet. Brendan is closing in as well and will hopefully break that 20:00 barrier soon.  Lilly and Leah also ran very strong races; the best of the year for both, taking 1:01 and 1:39 off last year’s times, respectively.

On the Middle School side, it was another strong showing with five new lifetime PR’s and another new Middle School girls record.  Savanna shaved another eight seconds off her previous record and has her eyes set on sub-14 with two fast races to go in the season.  Kennedy broke the 15:00 barrier for the first time, and Kam took almost a full minute off her personal best.  On the boys side, Ben turned in another Top 10 performance as he draws close to that 12:00 barrier.  Both Ben and Shane took over 1:30 off their times from last year, and both Shane and Evan set a lifetime PR for the second week in a row (Chris tie’d his lifetime PR set at last week’s meet).

Here are the results for the Middle School:

(Thanks to Angie VanOstrand for several of this week’s pictures!)

Meet Notes – This is a favorite of many Evergreen runners, and for good reason. It’s a good mixture of open and wooded areas with both flat and hilly terrain, and several of our high school runners have their personal records on this course as it has hosted the District Championship the last few years and was the NWOAL League Meet course last year.  It is also a spectator friendly course, offering several locations to cheer on the runners (particularly at the start and finish).  Overall, it is a very well organized event and should be a great meet.

For this particular invitational, this course has been known to be a little more muddy and has included a water hazard (“shallow water crossing”) at the bottom of the hill near the end of the race.  Last year, there wasn’t much of an option other than going through the water, so plan accordingly as far as extra shoes/clothes for after the race.  Also, because of the number of schools running, they have separated the high school races into two divisions.  Evergreen runs in the second of the two divisional races, so there will be a bit of a gap between the middle school and high school races.

UPDATE – We still need a volunteer to provide the team meal this Friday.  Please let us know ASAP if you can help out this week.

With the craziness of the fall school season hitting full stride, we thought it might help a little to start putting the week’s events and plans out there ahead of time.  Here’s what this week looks like for Evergreen Cross Country:

Wednesday (9/23) – Hill day at Heritage Park in Adrian. We will do 800m repeats that include substantial hill work. Sunny and in upper 70’s, so plan and hydrate accordinly.

UPDATE: Evergreen will not be running in the tri-meet with Montpelier this Thursday. We will hold a regular workout after school this day. Our apologies for any confusion or inconvenience.

3:00pm – Bus leaves from Middle School (est. arrival 4:00pm)
4:30pm – Meet starts
6:30pm – Estimated return time (assuming separate boys/girls races)
Meet Notes – This is a three-way meet between Evergreen, Montpelier and St. Pats. These are a good opportunity for mid-week competition with local programs in a setting that’s a little more relaxed than the larger invitationals.  We will often treat these types of meets as special workouts or use them to work on specific race tactics.  It’s not clear at this time whether boys and girls will both run together or separately, but typically no awards are given out for team or individual placement.

It was a tale of two courses at Harrison Lake State Park.  The forecast called for a possibility of rain showers in the morning, and that’s exactly what we got as we endured at least a good inch plus of steady rain.  We were thrown a curve ball right from the start as they changed the course from previous years, essentially running it in reverse.  This turned out to be great for the middle school…not so much for the high school.  The first mile of this course is very fast; but where the middle school ends with a pretty decent second mile, the second mile of the high school course is a brutal battle uphill for what seems like the entire mile.  So whereas the middle school athletes were turning in PR’s left and right, the high school athletes were running split differences of +1:00 to +1:30 from the first to second mile.  To add to the difficulties, we had five high school athletes out with injuries or illness.

That said, it was still a solid effort by our varsity runners, both during an excellent first mile and some excellent finishing surges.

From what I heard, the Middle School races were fun to run (even if they weren’t quite as fun to watch) thanks to the rain.  We ran very competitively, finishing sixth as a team in both races. Both teams ran well, and eight out of the eleven runners set a new lifetime PR, including Savannah breaking her own Middle School girls record. Here’s how big the day was for those eight runners:

As we look towards the next meet at Widewater Park, we’re hoping to see our missing runners return to health. We have some great workouts planned for this week, so hopefully we’ll get past the injuries and illness and press on for a great Homecoming weekend!

Notes – One of the most beautiful courses we run with a few moderate hills and lots of wooded trails. Right now there’s a prediction of rain, and this has historically been a chilly meet, so dress and plan accordingly.

Give yourself extra time to find a parking spot and walk to the start/finish area: 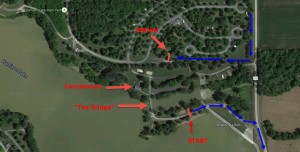 *There will be concessions available. However, we ask that athletes have a healthy breakfast that morning and NOT eat concession food until after they have competed.  We will have snacks provided.

Historically our first meet of the season, the Archbold Invitational served this year as our second race and gave us an opportunity to be more focused on specific running strategies.  Despite being a mostly flat and open course that one would expect to generate fast times, this course once again was slow for runners across the board, not just for Evergreen.

That said, every returning runner improved on their times from last year significantly. Grace and Leah each dropped about 1.5 minutes off their Archbold time from last year, Phoenix and Brendan both dropped almost two whole minutes, and Lilly dropped well over two minutes (almost 2:20)!  Alexis and Hannah also set lifetime PR’s in this race. That is an impressive testament to how much work these athletes are putting in.

For the Middle School team, this was actually our third meet. A volleyball tournament left us with only two runners for the girls’ race, but both Kennedy and Maddy made the most of it by setting season and lifetime PR’s (very significant given that their previous best times were on a pretty fast course at Lake High School).  The boys put up a strong showing, finishing tenth overall as a team. Ben and Shane shaved a minute and a half off of last year’s time, with both finishing in the top twenty. Evan, Chandler and Chris all gave strong efforts as well to edge us ahead of Swanton!

Here are the results for the Middle School:

While the race was not as fast as we had expected, this was a good step in our progression this year.  The next several weeks will give us some great courses to run as we continue to build momentum towards the NWOAL League Championship in mid-October. Next up is the Fayette Invitational at Harrison Lake!

(Thanks to Theresa Bryson for most of the photos!)

Our apologies for the lack of information for Tuesday’s NWOAL League Preview Meet, but we have not been given much in the way of details from the event organizers.  What we can tell you is that the bus will be leaving from the high school at 3:00pm to head to Patrick Henry High School.  Once there, we will warm up and run what is essentially a mock race on the same course they will run for the NWOAL League Championship on October 17th.  We’ll do a quick cool down and stretch, then board the bus and head for home.  Anticipated return time is around 6:30pm – 7:00pm.

Please note that this is essentially an offsite workout and not really a spectator event, so please do not feel you need to travel to Hamler for this run.  This is simply a chance for the teams to see the course and have the opportunity to run on it in advance of the League Meet.

Again, we apologize for the lack of information.  If you have any questions, please contact one of the coaches.

Our next meet is in Archbold at the reservoir. We’ll be seeing most of our NWOAL rivals here, so this is a good first look at our league competition.

Notes – This meet involves loops around the larger and smaller reservoirs, with hills in between and a downhill finish. The middle school makes one loop around each reservoir, while the high school adds a second loop around the larger reservoir. Spectators can see pretty much the entire race, although individual runners can be a little hard to make out when they’re on the far side of the water.

This can be a surprisingly fast course given that it’s mostly flat. We traditionally run a little slow at this meet, but in part because until this year it was always our first meet of the season. Defiance gave us a chance to get past the first meet jitters, and every returning runner ran faster at Defiance two weeks ago than they did at Archbold last year. So we’re primed to take a big step forward this week if we just go out and run a confident race, trusting in our training.

*There will be concessions available. However, we ask that athletes eat a healthy breakfast and NOT eat concession food until after they have competed.