Results and info available at http://www.baumspage.com/cc/otsego/inv/2016

Parking – Parking is limited at Mary Jane. Overflow parking will be located at the Marina located ½ mile west of Mary Jane. A shuttle bus will shuttle spectators to the park and back. Spectators are also welcome to park in Historic Downtown Grand Rapids and walk the scenic tow path to Mary Jane. You can enter the tow path behind Rita’s Dairy Bar, just west of LaRoe’s Restaurant or at the town park. To park in town you will continue straight at the Marathon station instead of traveling left to stay on Rt. 65.

Meet Notes – This is a new meet for us this year, but it’s a well-established one that should be enjoyable.  This meet does have both a varsity and open race, meaning for the boys team the top 7 from Defiance will run in the varsity race and the rest will run the open race.  They also provide an adult open race at the end of the meet where any adult can register for $5 and run the course for time, so it’s a great opportunity for spectator-parents who always wondered what the courses our athletes run are really like.

Recap: You just never know what to expect in the first meet of the season. You sort of get a feel for how workouts have been going, but at this point in our training cycle it’s normal to feel a bit fatigued as we continue to adjust to increased intensity of the workouts and the start of the school year.  The great thing about the Defiance meet is that the course gives a fairly realistic picture; it’s not terribly fast because of the hills, but it’s also not really a slow course (*cough*Archbold*cough).

With that said, the results from this weekend were excellent. Twelve of our high school runners set a personal record, including nine of the ten men.  Now, the men’s team is young so it’s easy to PR when it’s your first ever high school 5k, but even compared to their middle school times they were significantly improved. For example, Chandler’s split at mile two was 21 seconds faster than his two mile PR from the end of last season. 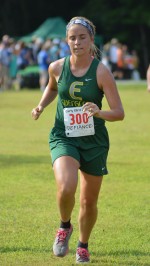 Ashley pushes to the finish

Chan works his way to the finish

Augie settles in around the mile mark 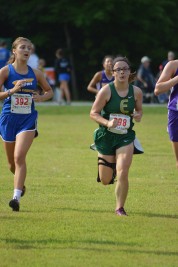 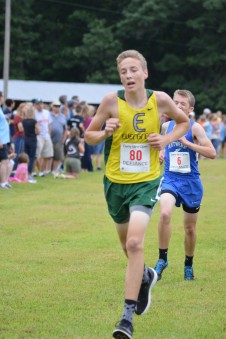 Phoenix surges past runners at the end 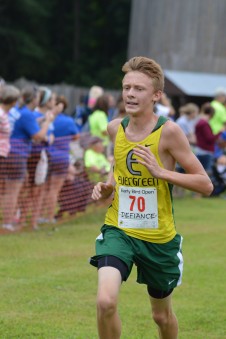 Jared guts it out all the way to the finish

Gavin works through his first 5k of the season

Trinity starts moving up through the field at the mile mark 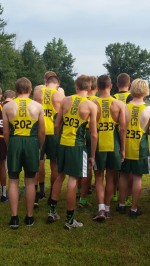 The high school men line up to start 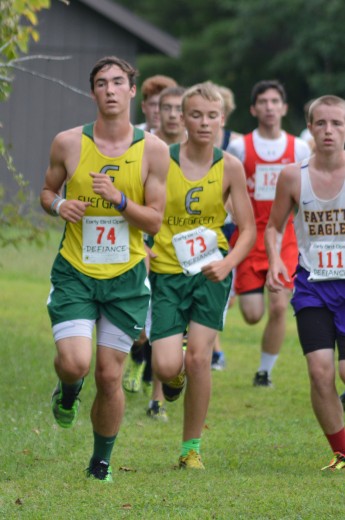 John and Chan work together to move up

Trinity works past competing runners in her final kick

Ben fights to pass runners at the end

Sarah chases down a Montpelier runner in the final sprint

Alexis finishes up her Defiance run

Sarah keeps a steady pace through mile one 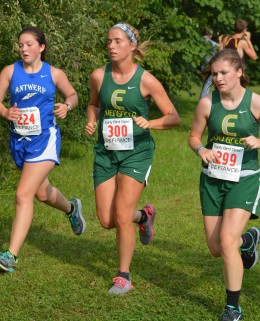 Ashley and Katie work together through the first mile

Pete keeps up the pace at the mile mark

To give you an idea of the progress made, consider the following:

The ladies’ team finished 9th overall out of 18 teams, and their team average of 24:42 for the top five runners was 3 seconds faster than the top individual Lady Vike from last season. The men didn’t have enough runners to score last year, but their top 5 average of 21:00 crushed the four-man average of 24:10 from last year’s meet.

Here are the official results for the High School:

The middle school race is a bit different at Defiance. Whereas the high school gets a flat, fast mile to start before heading into the hilly section, the middle school heads straight to the hills.  This makes the impact of “The Hill” at the end of the race that much more significant.  Despite this difference, both Kayla and Owen were able to take time off their PR from last Thursday’s Lake meet, dropping 2 and 38 seconds, respectively.  While neither team had enough to score in the meet, our first three girls finished in the top 15 of the race, and Jolie showed incredible determination in passing several runners coming up that intimidating hill at the end.

Paige crosses the bridge near the end

The middle school team kicks off their race 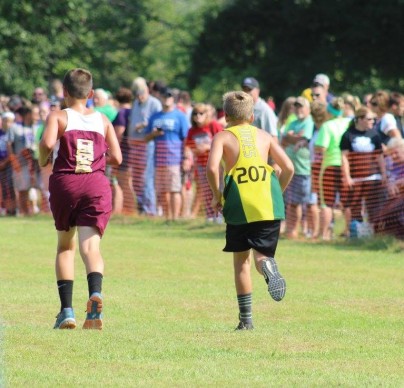 Owen sprints to pass another runner at the end 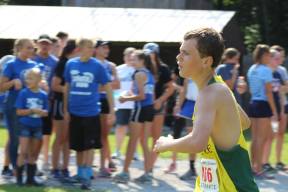 Will works hard to finish strong

Paige pushes towards the finish line

Kennedy turns the corner as parents and coaches cheer her on 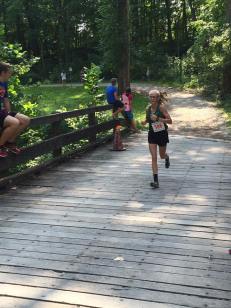 Kennedy crosses the bridge to the final hill

Chris turns the corner to the final stretch 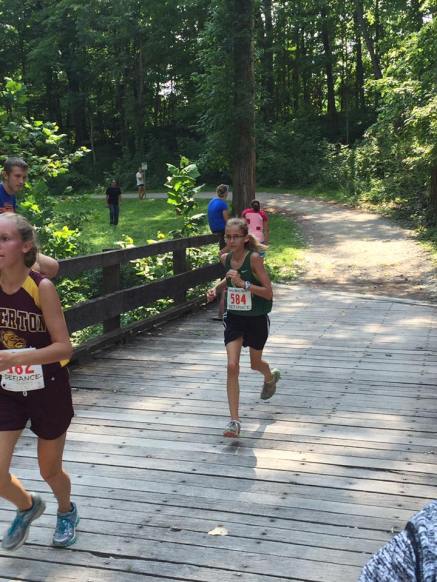 Kayla tracks down another runner heading to the final hill

Evan rounds the corner for home

Kayla turns into the final sprint

Here are the official results for the Middle School:

Up Next: The High School travels to the Otsego Invitational at Mary Jane Thurston State Park this Saturday 9/2, and the Middle School has a week off before heading to Archbold on 9/10.

Recap: The first meet of the year is in the books for the Middle School, and for several it was their first race ever.  The Lake meet always provides a great way to start off for the Middle School runners by separating the 7th and 8th grader into different races.  The heat and humidity were a bit of a factor this year, but the Viking runners did a great job competing against a fast field.

Chris pushes past a runner from Perrysburg

Kayla pushes on the way to a 4th place finish

Owen battles the heat in his first race 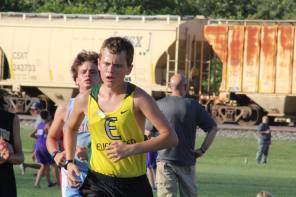 William surges past an Eastwood runner

Some notes from the races:

With new PR’s set and a great first effort, the Viking Middle School Cross Country team is off to an excellent start!

Big thank you to Theresa Bryson for the meet photos!!

Up Next: Defiance Early Bird Open

Meet Notes – This is a fairly challenging course, but a great example of what cross country is all about. The high school runners get a fairly flat first mile before running down “The Hill” and into the trail portion (the Middle School just goes right down the hill).  The remaining two miles consists of trail running and eventually a climb back up “The Hill” right before the finish. 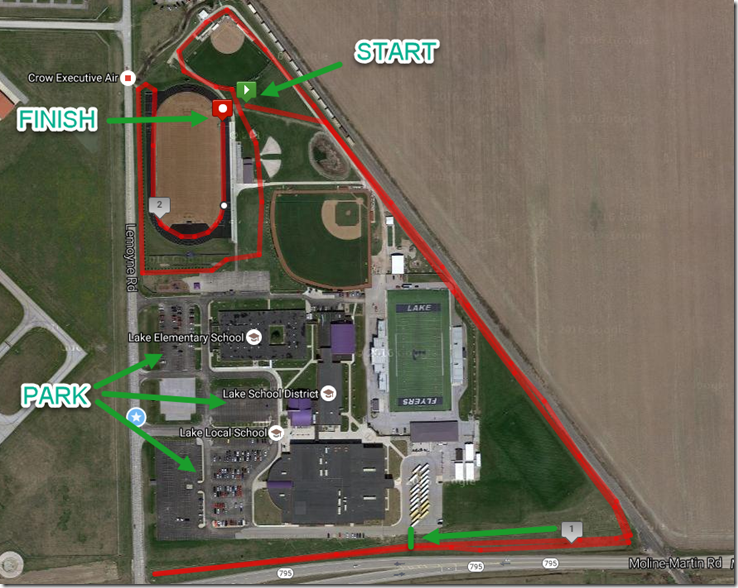 Meet Notes – This is a unique one for the Middle School runners as they run 7th grade and 8th grade separately, so the new 7th grade runners are a little more relaxed not having to compete directly against the 8th graders.  It’s a moderately fast course that starts just outside the track and ends at the start/finish line on the track.  The map provided is an approximation of the route, which has changed slightly over the years. The mile mark is on the south side of the school, and they hit the mile as they’re coming back across it.  If you walk fast, you can get from the start line by the field house across the parking lots to the mile mark before the runners, and get back across the parking lot to see them finish on the track (although you may question who’s getting the better workout if you’re trying to beat the frontrunners).

*There will be concessions available. However, we ask that athletes have a healthy lunch and NOT eat concession food until after they have competed. We will have healthy snacks provided by parents; athletes are strongly encouraged to partake of these before and after competing.

It’s the first week of the new school year, and that means it’s time to settle in to the standard practice schedule.  As such, we’re moving Monday and Tuesday’s practices to 3:00pm due to the Middle School and Elementary School Open Houses those two evenings.

Also, a quick word about weather:

The coaches will send out a Remind text alert if we need to alter or cancel practice due to weather. If you don’t hear otherwise, assume we are still having practice as planned and dress accordingly.  They don’t cancel meets for rain, and we don’t cancel practice for rain. The only exception is for lightning, which we will address case-by-case.

Here’s how this week is shaping up:

Weekend – No scheduled practices or events; however, an easy few miles is recommended on Saturday.

We are not heading there as a team. However, if you are looking for new running shoes or gear this is a great opportunity to save some money and have the help of the knowledgeable staff at Dave’s Running.

Here’s our practice schedule for the week of August 8:

Also, the Park-O-Rama 5k is Saturday morning at 8:00am in Metamora. This is optional for the team, but highly encouraged for high school athletes who have been running for at least the past month.  Registration info is available at the link provided.

Parents, if you were unable to attend the Parent Meeting on July 28, I urge you to check this handbook out. It is loaded with information regarding our season. If you have any additional questions, please ask! 🙂 EVGRun-ParentInfo

August means the start of official practices for Evergreen Cross Country.  Here is the practice schedule for this first week:

Tue 8/2 6:30pm (EHS) – Track work. Speed reps or mile time trial for those who’ve been running, easy base mileage for those just starting out.

If you have any questions, please contact the coaches.  See you out there!